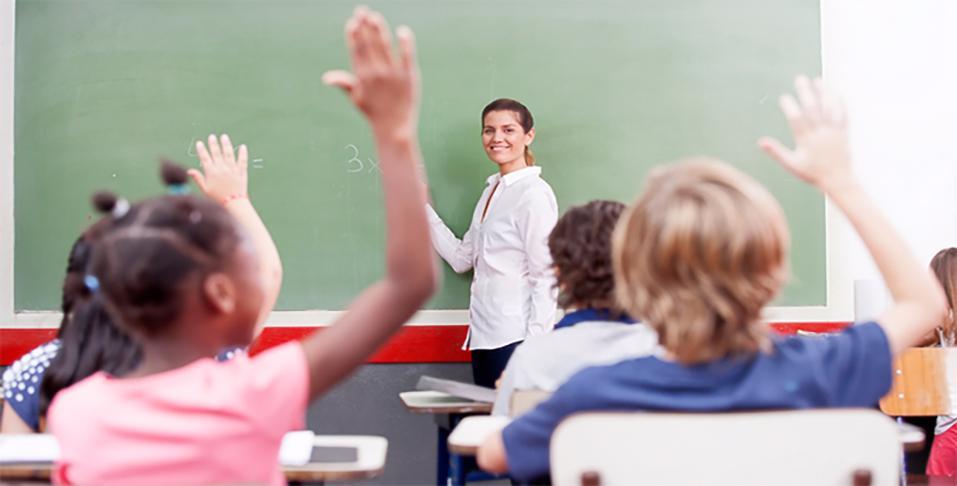 What if a simple change in lighting could improve the way students perform in school? There’s significant evidence that proves that this is possible with the use of tunable white lights. Traditionally, classrooms have been lit by fluorescent fixtures that emit a single color of light. This color can range from warm white to cool white, but once a light fixture is chosen, there’s no option to change its color throughout the day. Research has shown that the inability to change lighting color to match a natural lighting cycle can have many negative consequences on the body’s mental and physical behavior.

Tunable or Selectable white lighting, on the other hand, can be used to mimic a natural light cycle, which is beneficial to the mind and body. This type of LED fixture emits various shades of white light and can be controlled with a remote or wall switch. In addition to its energy-saving benefit, tunable white LED classroom lighting is linked to improved alertness, concentration, higher test scores, and reduced hyperactivity.

Standard light fixtures have the ability to emit one of several shades of white, which is referred to as the fixture’s correlated color temperature (CCT). CCT is measured in Kelvins (K). Different temperatures on the Kelvin scale represent different colors.

Throughout the day and into night, light follows a color cycle similar to what’s shown above (orange-yellow-white-blue-white-yellow-orange). Our bodies are used to this cycle. Artificial lights that deviate from the natural lighting cycle can throw off our circadian rhythms. Circadian rhythm is how your body responds (physically, behaviorally, and mentally) to light and time of day.

According to healthybuildingscience.com “. . . different types of light trigger different physiological effects. Blue/white light, akin to a bright midday light, suppresses melatonin and increases serotonin. This light is great for activity. Conversely red/orange light triggers melatonin in preparation for going to sleep. If everything is in balance, the body will generate dopamine, serotonin, cortisol and melatonin in the right quantities at the right time of day.”

Various researchers have found that when circadian rhythms are off, anything from sleep disorders to irritability and illness can occur. In the U.S. Department of Energy report, Tuning the Light in Classrooms: Evaluating Trial LED Lighting Systems in Three Classrooms at the Carrollton-Farmers Branch Independent School District in Carrollton, TX, it was mentioned that, “In classroom applications, circadian response considerations can include providing lighting that may support the suppression of melatonin during daytime hours and providing lighting that may minimize the suppression of melatonin during evening hours (when classrooms may be used by other community groups).”

For the body to be able to perform well, it’s important that our circadian rhythms are stable. According to Lighting for People, a website that focuses on human-centric lighting, “Lack of bright and blue-rich light in the morning delays the body clock and makes us go to bed too late.” This was confirmed with a study involving 11 teenagers during a five-day school week. The study was created to reveal the correlation between light color in the classroom and circadian rhythm. Specifically, the study focused on if there was a change in melatonin onset time if the students were exposed to light at low CCTs.

During this study, the students wore orange-colored glasses to filter out all blue light. It was reported that, “A significant delay in DLMO (dim light melatonin onset) of about 30 minutes occurred in the participants after wearing the orange glasses that indicates that a lack of short-wavelength light may lead to a change in circadian rhythmicity . . . . A delayed circadian clock (eveningness) can lead to disadvantages in exams and poorer academic performance.”

In a study published in Optics Express, titled “Dynamic lighting system for the learning environment: performance of elementary students,” Kyungah Choi and Professor Hyeon-Jeong Suk wrote that, “. . . using high-CCT white lighting can improve subjective alertness in students attending lectures.” They go on to say, “In one of the earliest studies of dynamic lighting, Wessolowski recorded significant improvements in German students’ performance as assessed by increased reading speed, decreased errors, and decreased hyperactive behavior. In support of this argument, Sleegers, et al. observed a positive effect of dynamic lighting on the concentration of Dutch elementary students.”

Choi and Suk performed several experiments. In the first, they found that different CCTs create physiological arousal and relaxation. Participants were exposed to 6500K cool white light and 3500K warm white light, and their physiological responses were captured with an electrocardiogram (ECG). The ECGs showed that cool white light was arousing and that the warm white light was relaxing. There is a time for both shades of white during every school day—times where focus and concentration are needed and times for recess/social interaction.

In another experiment, they discovered that students performed better on math tests taken in 6500K cool white light. This study involved two fourth-grade classes from the same school. One classroom had fluorescent light fixtures, and the other had tunable white LED light fixtures. Students in both classrooms were given a math pretest and a post test. Cool white light was used during the second test in the classroom with tunable fixtures. Students with tunable white LED classroom lighting had improved test scores on their second tests, and there was no significant change in scores from students in the fluorescent-lit classroom. Overall, it was found that the percentage of correct answers was highest in cool white lighting. The study also showed that warm white light was most appropriate for recess activities.

The benefits of tunable white lighting have been proven by study after study. If schools were to make an investment in this type of technology, they would be creating an environment that’s true to what schools strive to be—helpful, caring, and conducive to student success. These new classrooms would be part of creating healthy individuals—not just mentally but physically by giving them what their bodies need.