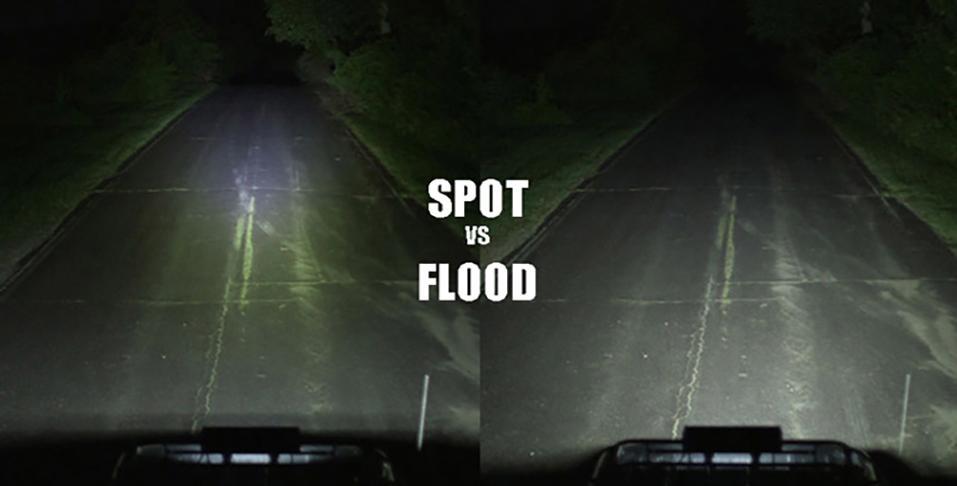 Spotlights Vs. Floodlights: What's the Difference?

What is a spotlight? What is a floodlight? Knowing the difference between the two is important for properly lighting any application. Before you can understand the difference, you must know what a beam pattern is. Beam angle or pattern is a measurement of the angles that are formed between a cone of light’s brightest point (the center) and the points on both sides of the center where the light’s intensity is 50 percent as bright.

A larger beam angle means a wider spread of light across an area and vice versa with small beam angles. It might be easier to think of a beam in terms of width. To convert beam angle to beam width, use this formula: beam angle in degrees x 0.018 x distance from the bulb or fixture. The chart below shows beam width at different distances from the ceiling/mounting surface.

While it depends on the angle and individual light retailers, small beams are often referred to as spot beams, and larger angles (usually anything above 90 degrees) are considered flood beams. Bulbs and fixtures might not always be labeled as spot or flood specifically, but their beam patterns define them as such. Floodlights and spotlights come in many different styles. Sometimes bulbs or fixtures may look the same but emit completely different beam patterns.

PAR and MR bulbs, for example, are just a couple of many bulbs that can be used for either flood or spot lighting. The photo below shows a PAR30 bulb that is available with a spot or flood beam pattern.

Fixtures, such as LED light bars and retrofit LED can lights may also look similar to one another while functioning as either spotlights or floodlights. Some light bars are even capable of emitting flood, spot, or combination beams. There are, however, certain fixtures that we imagine when we think of floodlights and spotlights.

A simple Google image search for floodlights will reveal hundreds of large square fixtures that are typically used for landscape lighting, parking lots, tree uplighting, architectural lighting, work lighting, and other applications that require wide light spread. These lights not only have flood beam patterns but are usually referred to as actual floodlight fixtures.

Spotlights are usually significantly smaller than floodlight fixtures and are designed for highlighting small areas. These lights are often found in gardens, theaters, above garage doors, on police and search and rescue vehicles, or other applications where focused light is needed.

If you’re offroading and need to see far down the path ahead of you, a spotlight will project a longer, narrow beam of illumination. A flood beam would allow you to see a wider area at a closer distance.

A bulb with a spot beam pattern would also be the best choice if you’re installing track lights in your kitchen and need to highlight the sink or stove as it will shine exactly where you need it.

If you want to illuminate the front of your house, you will need a floodlight because it can cover more surface area.

In the end, it’s up to you to choose which light is best for your application. Just keep in mind what large and small beam patterns are designed to do, and you should have no problem creating the look you’re aiming for.