Traditionally, high-intensity discharge (HID) fixtures have been the go-to for illuminating outside parking areas. These high-power lighting sources provide basic, low-grade light, are expensive to maintain, consume a large amount of power, and are unpleasant to the eye. LED parking lot lights require no maintenance, consume significantly less power, and provide better light quality, which makes them a great alternative to HID fixtures.

LED fixtures, such as area lights, wall packs, or canopy lights consume up to 80 percent less power than HID fixtures and can last 50,000 hours or more—approximately three times longer than HID bulbs. Although LED fixtures require a greater initial investment, they make up the difference in energy savings and life span. Because LEDs last so long, the only maintenance these fixtures require is periodic cleaning; they avoid the major costs associated with HID fixtures.

An HID parking lot fixture is designed to last 10,000-20,000 hours before needing a new lamp. To prevent damage to the ballast and capacitor, lamps should be replaced when they reach 70 percent of their rated life. Let’s say a small department store has 25 HID parking lot lights that are rated at 20,000 hours and runs them for 11 hours per day. The lights would run for 4,015 hours per year, which means that they would last about five years (20,000/3,960 = 4.9). However, 70 percent of 20,000 hours is 14,000 (or about three years). This means that every three years, the store would have to relamp their group of lights. Unfortunately, relamping isn’t as simple as buying a new bulb.

The cost of an HID bulb can range from $8 to $60 depending on wattage, type, and style. In addition to the cost of new bulbs are lift rental and electrician labor costs. According to the U.S. Department of Energy (DOE), group relamping prices can range from $150 to $300 per HID fixture. This means that if the small department store choose to relamp their entire group of 25 HID parking lot lights once every three years, it would cost them anywhere from $3,750 to $7,500.

The estimate above doesn’t cover any spot relamping that might be necessary throughout the year, which would include the same types of costs (bulbs, lift rental, and electrician labor) but at a higher rate than the typical $150-$300. It also doesn’t cover ballast or capacitor replacement costs if they’re necessary. For reference, a 400-watt ballast kit, which includes a capacitor, can cost anywhere from $30 to $120 or more.

In some cases, group relamping includes replacing the ballast and capacitor as well as the HID bulb. This might be necessary in cold areas that cause premature ballast failure or if there is any underlying issue that causes premature wear on the HID fixtures’ components. That could add an extra $3,000 (25 ballast kits at $120 a piece) to the original relamping cost of up to $7,500 for the small department store. If this were the case, they’d be looking at $10,500, or $3,500 per year, in maintenance costs as a high point. Keep in mind that totals will most likely rise yearly due to standard inflation in labor and product costs.

If the small department store converted to 25 LED fixtures, the only costs they are likely to experience are for the fixtures themselves and installation. For example, if a 150-watt (400-watt HID equivalent) parking lot light was chosen at the price of $340, the total would be around $9,000 for the lights alone. That’s still less than the possible $10,500 of group relamping every three years. With added energy savings from using LEDs, it wouldn’t take much time to recoup the fixture costs and start seeing a return on investment. 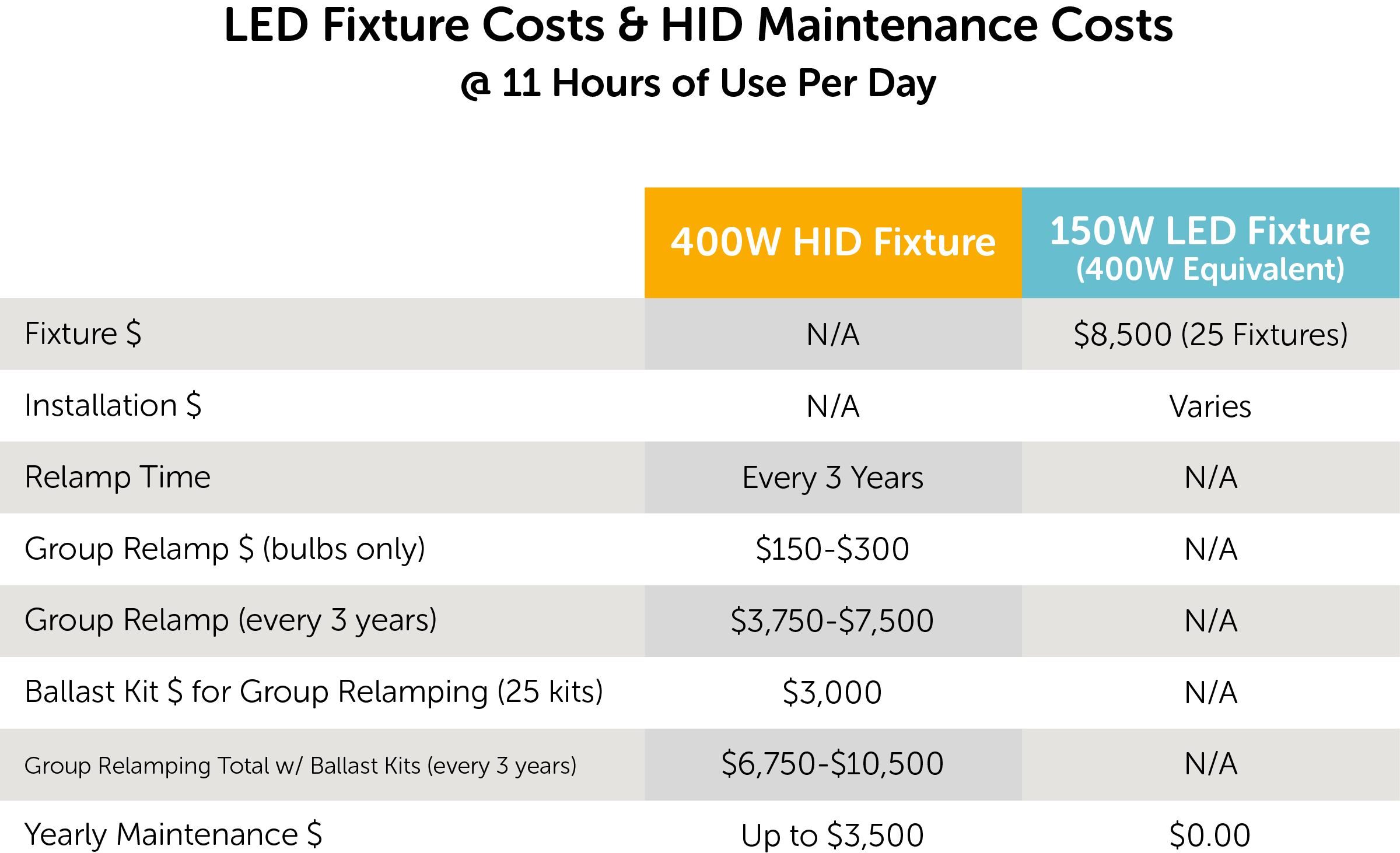 With energy consumption that is less than half of what HID fixtures consume, LED parking lot lights save a great deal of money in annual electric costs. Super Bright LEDs offers a 150-watt LED parking lot light that is a direct replacement for 400-watt metal-halide (MH) fixtures. That’s 250 watts less for the same amount of light!

When the same formula is used for 400-watt MH fixtures, the monthly cost is $396, and yearly cost would be $4,752. So, in this situation, switching to LED fixtures would save approximately $3,000 per year. When coupled with the savings on maintenance, LED fixtures can save $6,470 per year. At that rate, the cost of 25 $340 LED fixtures would be recouped within two years. 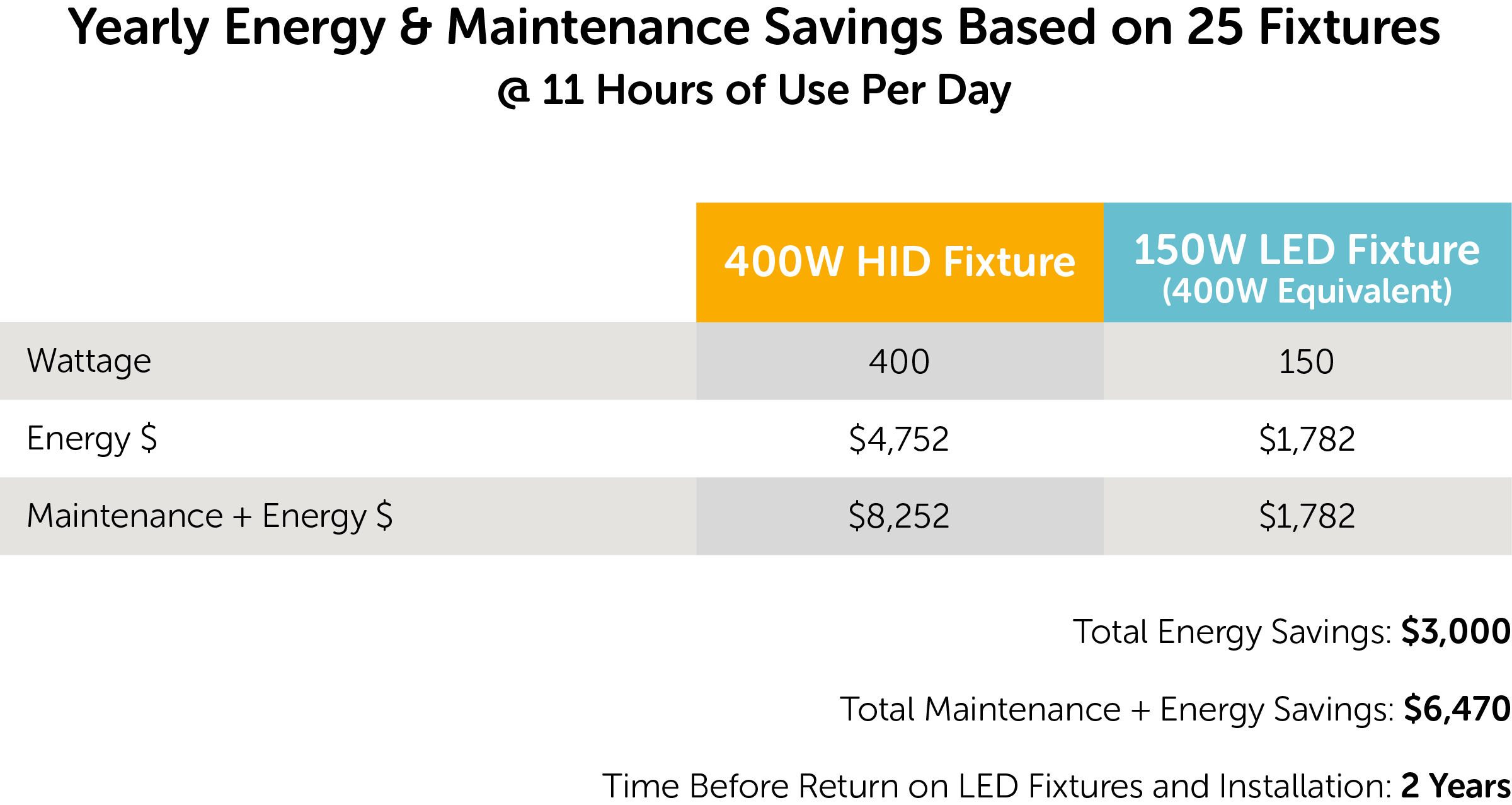 Light from an HID fixture can range from natural white color to orange and green depending on the type of bulb. MH fixtures will begin to emit light with a pink hue from extended use. This indicates that the bulb needs to be replaced. It’s also possible to see green or blue light from MH fixtures, which can happen when the capacitor is failing. LED parking lot fixtures maintain the same natural white or cool white color throughout their entire life span.

HID fixtures also tend to have a low color-rendering index (CRI), which refers to how accurately a light source reveals the true colors of objects, people, and surroundings. CRI for an HID bulb can range from zero (high-pressure sodium) to about 65 (metal-halide). LED fixtures are capable of having CRIs of 75 and higher. Lights with a CRI of 80 or higher are considered to show colors most accurately and increase visibility, which is especially important for security purposes and parking lot surveillance. In addition to increased visibility, LED fixtures deliver uniform, focused light with less glare. HID fixtures emit multidirectional light that is often wasted on undesired areas. Because of the crisp color, improved visibility, and focused, uniform beam patterns, LED lights appear brighter than their HID counterparts—even with the same lumen output.

Like HID fixtures, LED lights experience lumen depreciation over a period of time, but they do so at a much slower rate. For an LED fixture, rated life span is the point at which it retains 70 percent of its initial light output. For example, if a 50,000-hour LED lamp emits 17,000 lumens initially, it will produce approximately 11,900 lumens at the 50,000-hour mark. HID lamps will lose about half their brightness by the time they reach half of their rated lifespan. So if a 400-watt HID bulb is rated for 10,000 hours and emits 17,000 lumens initially, it will only produce about 8,500 lumens at the 5,000-hour mark. What’s even more unfortunate than the light loss is that power consumption remains the same. The 400-watt HID bulb will still be consuming 400 watts but with a light output that’s half of what it started with.

Unlike LED fixtures that light up instantly, HID parking lot lights require a warmup period of up to 10 minutes before they reach full brightness. They also can’t be turned immediately back on after being switched off; this is called restrike time, and it can take up to 15 minutes before they can be turned on again. Attempting to power on the lights before the bulbs have cooled can damage a fixture’s components and cause the HID bulb to fail sooner.

HID lamps consist of a ballast and a quartz tube that contains gas, metal salts, and two tungsten electrodes. In order to create light, an electric arc passes from one electrode to the other through a gas (most commonly mercury, metal halide, or sodium). The mercury used in this process is dangerous if enough is inhaled or released into the environment. If an HID bulb bursts, all contents should be put into a sealed container or sealed bag and taken to a recycling center or hazardous waste facility. If HID fixtures are used indoors, special precautions must be taken after bulb contents are disposed of, such as turning off heating and air conditioning systems and airing out the room. LED fixtures contain no mercury or harmful gasses, so they require no special disposal procedures.

If HID area lights, such as wall packs and canopy lights, are used indoors, the possibility of ultraviolet (UV) radiation exposure should be taken into consideration. HID bulbs emit a substantial amount of UV radiation, but an outer glass envelope prevents the radiation from escaping. However—according to the FDA—”If the outer bulb breaks and the inner tube continues to operate unshielded, intense UV radiation is emitted. UV exposure at this level can cause eye and skin burns, as well as blurred or double vision, headaches, and nausea.” The UV light from an HID bulb with a broken envelope can also lead to discoloration of items and fabric. LEDs emit little to no UV radiation.

In short, LED lights are a better alternative to HID parking lot lights. They offer a great deal in the way of savings, longevity, maintenance reduction, brightness, color, and safety. While it may take a short amount of time to recoup the price of switching to LEDs, all of their qualities make it easy to see why so many businesses have started the process.